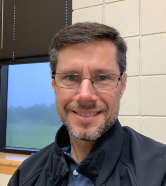 Shane has been working in the information technology field for over 20 years and is the latest addition to the Final Frontier officer corps. He will play a vital role with endeavors, both internal and external to Star Atlas .. "I want to start off by saying that I love my wife. She’s a wicked awesome person who always encourages me to do the things I’m most passionate about. Gaming has always been one of those passions".

" I've been playing video games since Atari 2600 days, which sort of makes me one of those "old gamers". I play on the Xbox console more than anything. I'm a casual gamer and sitting back on my sofa playing a game is more my style. I enjoy playing single-player campaign games and open-world games. My top games are Halo, Red Dead Redemption, and any Star Wars game. I went into the Navy after I graduated for 4 years with an honorable discharge. I worked on the flight deck on the USS Constellation CV-64 launching aircraft off the catapult systems. It's one of the scariest jobs I have ever had, and most dangerous. There's nothing more exhilarating than seeing an EA-6B Prowler roll up onto cat3 and hooking up the holdback bar onto it. Seeing it launch, priceless. After the Navy, I began my career in the IT field where I spent 20 years. I started as a help desk technician and later moved into system administrator and some network administration. "

Tweets by FinalFrontierSA
Return to Team